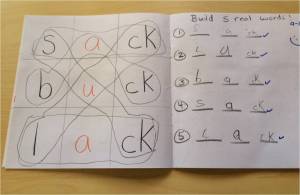 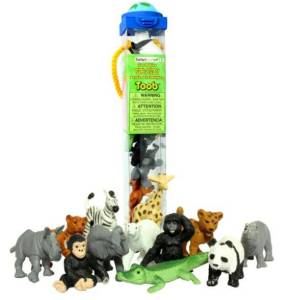 My new student and I started playing what I call “prop” stories. Prop stories start with small three-dimensional toy figures, or pictures on felt or magnets, that depict animals, people or other realistic or fanciful objects. A blank background can work or you can use a specific background like a zoo theme for example. The key is to focus on your child’s specific interests.

To introduce these prop stories, I model the story first using specific sentences, which I ask my student to repeat. For example in my zoo prop story I might say, “A mother takes her son to the zoo. They see the penguins swimming in the water. They see the elephants swinging their trunks.”

As your child gets more comfortable with vocabulary and sentence structuring, he can begin to create his own stories without your prompting and labeling of words. 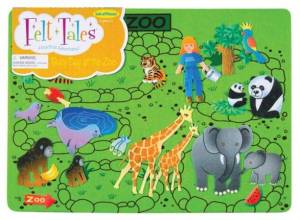 Prop stories are great for children as young as 18 months – 2 years and for older children too. You can find materials for your child’s prop story around your home or can purchase magnetic and felt story sets at teacher school supply stores.

Prop stories are fun. Your child will see them as play and will be motivated by the imaginative interactions with you. As your child plays with you, she expands her vocabulary and language skills as you label the words and create a better grasp on sentence structuring. Your child’s creativity grows too as your child creates and tells stories.

How do you help build your child’s vocabulary through play?